MTMS Alum is Responding to his Calling as a Paramedic 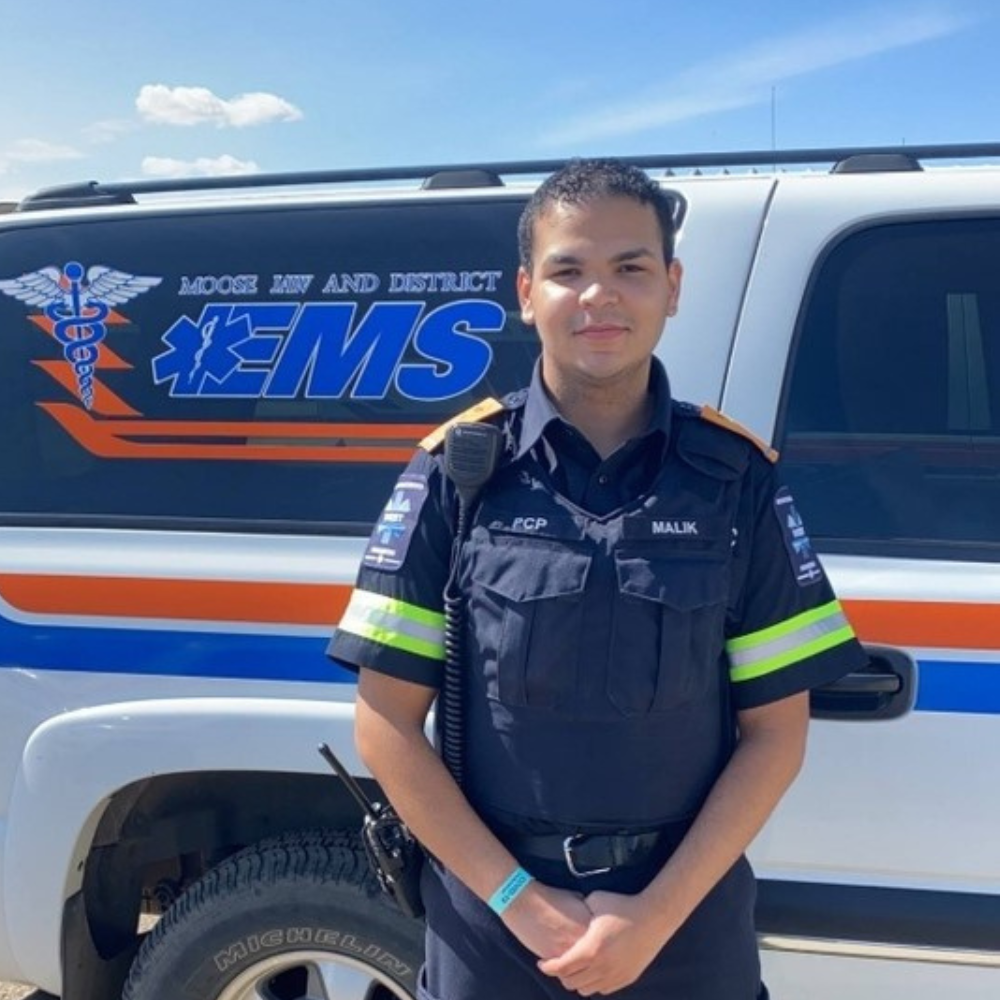 Helping others has always come naturally for Malik Hassan-Weiss, “I always knew I wanted (a career) where I could help people. I really liked health and knew I wanted to do something in the healthcare field,” said Hassan-Weiss. He credits his experience at Mother Teresa Middle School (MTMS) for helping guide him on a path to success. MTMS uses an innovative educational model that pledges to follow students from grade six, throughout high school, and post-secondary up to employment.

MTMS helped me envision my future. By showing me what success looked like at such a young age, that was something that I was always pushing towards. I wanted to be a positive, good person in society.” - Malik Hassan-Weiss

“MTMS really had you think about your future and what you wanted to do. The school would invite successful business leaders and people who had different careers into the school,” recalled Hassan-Weiss. At the start of grade 6, each student was provided with a book to hold business cards. When a guest would visit the school, students would ask for a card to add to their book. “By the time I finished middle school, my book was full of business cards. Through networking with the guests, MTMS helped me envision my future. By showing me what success looked like at such a young age, that was something that I was always pushing towards. I wanted to be a positive, good person in society,” said Hassan-Weiss.

The passion for learning, that was ignited in middle school, carried over when it was time for Hassan-Weiss to attend high school. He felt the support received by the Graduate Support Program (GSP) at MTMS made the transition into high school easier. The Graduate Support Program at MTMS strives to engage students’ intellectual curiosity, celebrate their culture, and equip students with the support they need to succeed throughout High School.  “The GSP provided all the essential things I needed. They (The Graduate Support Team) were good at keeping in contact and would send you a message, letting you know they were there if you needed anything. They would also visit the school to check in and just wanted to make sure you were doing well,” said Hassan-Weiss. With the support of the GSP, Hassan-Weiss was able to keep his focus and energy on his academic and career goals. Upon graduating from high school, Hassan-Weiss turned his attention toward the healthcare field.

Although Hassan-Weiss envisioned working in the healthcare field from a young age, the idea to pursue a career as a paramedic came from an unexpected source. “I was on YouTube one day and a video came up where a guy was documenting his journey as a paramedic in Canada. I found his experience very interesting and I had kept it in the back of my mind,” said Hassan-Weiss. When the time came to choose a career path in the field, he was determined to explore becoming a paramedic further. “MTMS was really supportive. They brought me to Saskatchewan Polytechnic for a walkthrough to see the actual paramedic program and I got to spend a day there. I was able to talk to the school and see how it was run and then I actually got to see the students going through scenario training and what I was getting myself into, it was really cool,” said Hassan-Weiss.

Feeling exuberant after the visit to Saskatchewan Polytechnic, he was more certain than ever that becoming a paramedic was what he wanted to do. However, there were barriers that he needed to overcome. He needed to obtain several different certifications as admission requirements and had to navigate the financial barrier of tuition and fees associated with the program. “MTMS helped me get those (certificates) in order and provided financial support by assisting me in accessing the different funding avenues available, like grants and scholarships, including the MTMS MacKay Family Bursary,” said Hassan-Weiss. The perseverance of Hassan-Weiss was further put to the test as he began his program amid the COVID-19 Pandemic, with no in-school learning in place. “It wasn’t until my second semester that we were able to resume the small groups and scenarios. It was an obstacle to overcome. I was thankful for the friends I made in the program, it was stressful because if you failed the final exam, you have to try again the following year. My schooling was online but I was staying up until 3 – 4 in the morning. I was trying to figure out a balance between studying and my regular life outside of school. The MTMS College and Careers Coach helped me navigate through that difficult time,” he said.

Despite the challenging circumstances Hassan-Weiss faced, he passed the final exam on the first try and is now employed as a paramedic in Moose Jaw. Hassan-Weiss’s path to get to where he is today is inspirational to other MTMS students. His brother, Abraham, who just started High School this Fall, is one of them. “I tell my younger brother that you need to stick with it and figure things out. You need to just go for it and work hard towards a better future for yourself. When I see how excited and happy my brother is for me, it is an incredible feeling,” said Hassan-Weiss. Exemplifying Hassan-Weiss’s helpful nature, he hopes that sharing his story will inspire future MTMS students and that he can have the same impact the guests he looked up to in middle school had on him. “When I look back at MTMS and what they have shown me, they have shown me what it takes to be successful. When I come in now (to the middle school), I feel in a type of way, they (MTMS students) can look at me as that guest that I looked up to when I was in middle school. I feel like I can be a role model for future students,” said Hassan-Weiss.