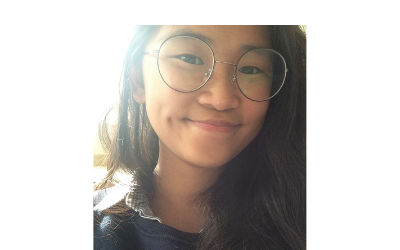 Walking down the hallway of Mother Teresa Middle School (MTMS) evokes nostalgia for Eunice-Grace Domingo. As she enters the lounge for an interview, she is immediately drawn to the collection of books that fills an entire wall within the room. “I remember reading a lot of these books,” Domingo exclaims. It is natural that she would be drawn to the wall of novels. She is a proficient writer in her own right, as an English major at the University of Saskatchewan. “I always loved writing, I always loved storytelling,” said Domingo. Her love of writing was affirmed when she took an IB English class on a whim in high school. Her writing ability, knowledge of literature, and knack for creativity impressed her teacher right away. “He was really impressed that I read Anna Karenina by Leo Tolstoy. Nobody he taught in his forty years of teaching had read that book,” said Domingo.

"MTMS is like a second family, they were very supportive through a lot of challenges. I still really value a lot of the stuff that I was taught and a lot of the experiences they provided for me." - Eunice-Grace Domingo

When she began University, she initially enrolled in Biology but her love of storytelling prevailed. “I switched from Biology to Honors English. Honors English gave me the opportunity to take more English classes instead of electives,” said Domingo. She has never looked back since, as she completed her undergrad this month and was recently accepted into graduate school which will begin in September 2022. However, arriving at this point was not an easy road. “My parents sacrificed a lot to get me here, MTMS sacrificed a lot to get me here, I sacrificed a lot to get here. I know that life is topsy-turvey but I think the one thing that kept me going is my family. Having moved to a new country, having to learn English, having to figure out finances and where to live. I saw that modeled at a very young age and I saw how much people struggled. I understood that it’s more difficult for people like me, as a visible minority and being a woman. I think that has been a driving factor, I just want to do what my family came here to do but also on my own terms,” said Domingo.

Domingo was part of the first-ever Grade 6 class at MTMS in 2011 and recently became the first MTMS student to complete a four-year undergraduate degree. She has always felt supported by MTMS throughout her educational journey. Some of the post-secondary support she received from MTMS included being a recipient of the MacKay Family Bursary, which helped provide payment toward her tuition. MTMS also helped alleviate financial stress by providing payments toward rent and utilities when needed. “MTMS is like a second family, they were very supportive through a lot of challenges. I still really value a lot of the stuff that I was taught and a lot of the experiences they provided for me. They checked in on me (after middle school) and never let me down,” she said. Domingo has also been very inspired by what her fellow classmates have accomplished, many of whom will be completing their post-secondary programs soon as well. “The circumstances I was in and the people in my life let me be who I am. I went to school with a lot of smart kids who I think are brilliant and amazing. I’m very proud of them,” she said.

Looking ahead to the next chapter, she is excited about graduate school in September. Her project will revolve around a “Manga series about Japanese authors that puts them in a modern setting. It’s a homage to all these famous beloved authors and I’m going to talk about how it kind of subverts this idea of Eurocentric western canon because everyone learns about Fitzgerald, everyone learns about Anne of Green Gables in school. Even my cousins in the Philippines know about the literature I studied here but they don’t know about literature closer to home and literature that affected us a lot more in the past. So I’m going to be challenging that,” said Domingo. Since the Manga series came out in 2016, she will be the first person ever who will scholastically be researching this. Her work ethic, dedication, and passion for literature will continue to lead her toward great opportunities in the future. “I want to stay in the literary field. As long as I can write, read and help people, I’m open to where life takes me,” said Domingo.